✕
You can now browse California legislation from your mobile device at calaw.tabulaw.com. This is an extension of the work, described in these posts, to parse and display California's laws for more user-friendly navigation. I implemented this as a simple web application, using mobile-targeted style sheets, not (yet) a native application. On the devices I've tested, though, it's fast and convenient. Let me know how it works on your iPad, iPhone, Android, Blackberry, or other mobile toy device. 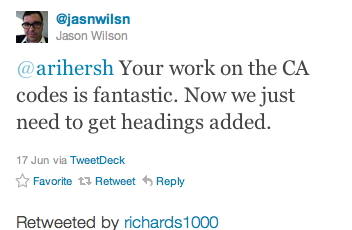 I also implemented an idea by Jason Wilson, and seconded (or at least retweeted) by Robert Richards, to add headings to California law sections, to help provide context. Wilson, of Jones McClure, a legal publisher, has given a lot of thought to legal technology and has many interesting ideas on how to make legal technology better. His suggestion on the California Laws site is just the kind of exchange I was hoping to generate. If you have ideas or suggestions to improve navigation of California's laws (or the Internal Revenue Code), let me know on twitter (@arihersh or @tabulaw) or in comments below.
Or make the changes yourself and send me a pull request on Github, where I've put the code for the California Law website. In some ways, using online collaborative technologies like Github brings things full circle for law: lawyers have been doing "open source" collaboration for millennia, taking branches and merging Biblical laws, Hammurabi's Code, the Roman Code and others to create new laws. I'd love to see Jones McClure and other legal publishers join in an effort to provide a truly open source repository of primary laws and court opinions, upon which secondary content and proprietary analysis tools can be built.
In future posts I will flesh out details of how this could work, in the context of California law and in open sourcing the Internal Revenue Code.
Tags: Ipad Iphone Jones McClure legal technology Blackberry California Legislation Android Mobile legislation
Share: Twitter Facebook LinkedIn